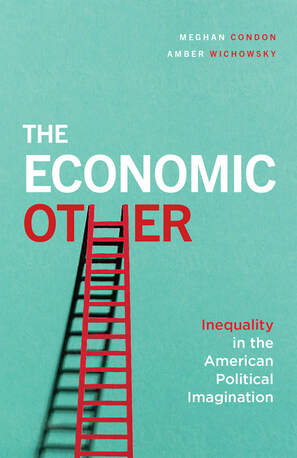 Book
The Economic Other: Inequality in the American Political Imagination
with Amber Wichowsky, Marquette University

Available now from The University of Chicago Press and your local independent bookstore. My favorites are The Ivy Bookshop in Baltimore, MD and The Book Table in Oak Park, IL.

Economic inequality in the US is at a record high, but public demand for redistribution is not rising with it. Meghan Condon and Amber Wichowsky show that this paradox and other mysteries about class and US politics can be solved through a focus on social comparison. Powerful currents compete to propel attention up or down—toward the rich or the poor—pulling politics along in the wake.

Through an astute blend of experiments, surveys, and descriptions people offer in their own words, The Economic Other reveals that when less-advantaged Americans compare with the rich, they become more accurate about their own status and want more from government. But American society is structured to prevent upward comparison. In an increasingly divided, anxious nation, opportunities to interact with the country’s richest are shrinking, and people prefer to compare to those below to feel secure. Even when comparison with the rich does occur, many lose confidence in their power to effect change.Laying bare how social comparisons drive political attitudes, The Economic Other is an essential look at the stubborn plight of inequality and the measures needed to solve it.

Jennifer L. Hochschild, Harvard University
"Some research in political psychology can seem like angels dancing on the head of a pin from the perspective of scholars focused on large political movements and big policy dilemmas—but not this book. The Economic Other uses elegant experimental and other techniques to explore two findings: how Americans compare themselves to others can increase their desire for greater social and economic equality, but how much they compare themselves to others can dampen that desire. Those are collective phenomena, not merely individual perversity. The combination is intellectually fascinating, politically infuriating, and morally disturbing—Condon and Wichowsky focus our attention on a dynamic that explains a lot of what is most troubling about American politics today."

James N. Druckman, Northwestern University
“This book is like no other. It uses cutting-edge social science methods to explain how citizens think about themselves, others, and public policy. In so doing, it provides invaluable insight into the pressing contemporary issues of inequality and redistribution. Condon and Wichowsky will change the way scholars study public opinion formation and how we all think and talk about inequality.”

Andrea Campbell, MIT
"Why are ordinary citizens so indifferent to socioeconomic inequality? Condon and Wichowsky offer a fresh, brilliant explanation to this central question of our time: the psychology of social comparison. Looking up at the privileged fosters awareness of inequality and support for ameliorating measures, but it is also uncomfortable and, therefore, rare. For emotional self-preservation, people would rather look down at the less fortunate, which undercuts mobilization around inequality. Engagingly written, theoretically sophisticated, and full of fascinating new data, this volume is a stand-out among the many books now examining inequality."

Katherine J. Cramer, University of Wisconsin–Madison
"It is no longer deniable that social class matters in United States politics. Condon and Wichowsky lay open how it works for the thoughts and behaviors of members of the public. Their careful and lucid analyses show us that in this context of economic inequality, people are often comparing themselves to others whom they perceive to be faring better or worse and that these comparisons matter for our contemporary politics. This is a sophisticated take that maintains a focus on gender and race and treats economic distinctions as the social and political phenomena that they are."

Benjamin I. Page, Northwestern University
"Rooted in social-psychological theory and a wealth of data from survey experiments, The Economic Other shines a bright light on a puzzling feature of our times: why soaring economic inequality has not produced a correspondingly strong demand for redistributive action. It shows that cross-class social comparisons importantly shape opinions about redistributive programs. Looking upward at high-income people encourages support for redistribution. But looking upward is uncomfortable and is discouraged by residential segregation, economic anxiety, and misleading media. Most Americans either avoid comparisons or look downward, reassuring themselves but blunting egalitarian impulses. Still, the authors offer some possible cures for this self-reinforcing dynamic of inequality."

Nathan J. Kelly, University of Tennessee, Knoxville"This is an important book, addressing an important set of questions, using innovative techniques to get answers. Condon and Wichowsky provide social scientists with a framework to understand the disconnect between rising inequality and support for redistribution. They provide progressive activists with a foundation to build more convincing messages. And on top of that, it is written in an engaging and accessible style."

Nicholas Carnes, Duke University"In the last day, how many times have you compared yourself to someone else? If you’re not sure, you’re not alone: people compare themselves to others all the time, sometimes almost unconsciously. What’s remarkable is that these social comparisons are often the hidden drivers of how Americans form political attitudes about some of the paramount political issues of our time—issues like inequality, redistribution, and social policy. In this engaging and carefully-researched book, Condon and Wichowsky shine an overdue light on comparisons across social classes—that is, how Americans think about people richer and poorer than themselves—and the surprisingly powerful ways that these views structure our attitudes about inequality and economic policy. If you want to understand why Americans react to inequality in the (sometimes surprising) ways that they do, you need to read this book."


Additional Research on The Politics of Inequality

Condon, Meghan and Amber Wichowsky. 2020. “Inequality in the Social Mind: Perceptions of Status and Support for Redistribution.” The Journal of Politics 82(1).

Wichowsky, Amber and Meghan Condon. “The Emergent Gender Gap in Economic Evaluations in the Age of Trump” (Under Review).

Wichowsky, Amber and Meghan Condon. 2022. “The Effects of Partisan Framing on COVID-19 Attitudes: Experimental Evidence from Early and Late Pandemic” Research and Politics 9(2).